Enrico is a colleague of mine in Quantide. Some days ago, he asked me how to get two different legends for several coloured lines in a ggplot graphic.
This is the wanted result:

The first version of his plot sounds like the following one: 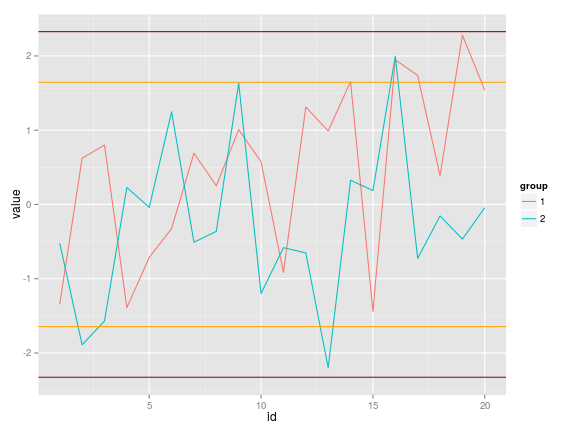 In this plot, he has six lines of four different colors:

When an aesthetic is mapped to data, the legend will be shown automatically. The plot shows the lines for group 1 and group 2. 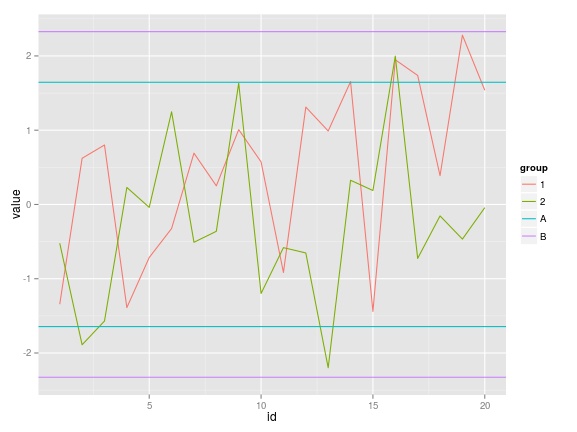 Colours are mapped to “dummy” data. Since the values are shown in the legend, Enrico used labels as “dummy” data. 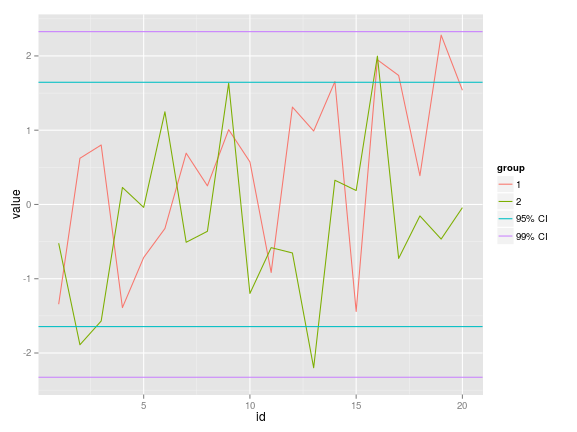 To set colors for horizontal lines my colleague Enrico used scale_color_manual(). This function allows users to choose which colors should be used for each line. 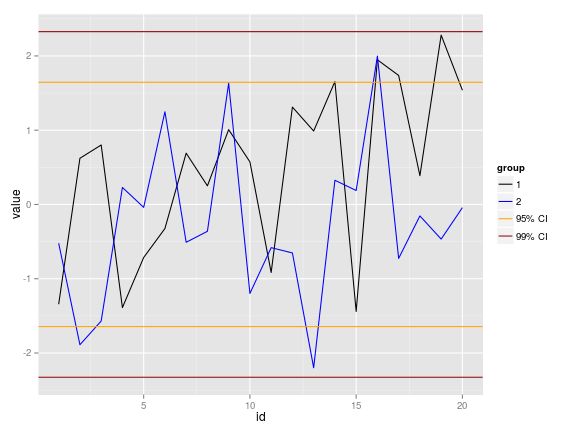 Of course, using scale_color_manual() information about default colors is lost so the colors for group should be declared. This can be annoying for (at least) two reasons: the number of groups may be not known and palettes are a better choice to get a set of colors. A work around consists of creating a function that rebuilds colors created by ggplot by default.

The function is passed to the value argument of the scale_color_manual() function, replacing the color names such as “black” and “blue” in the above plot. 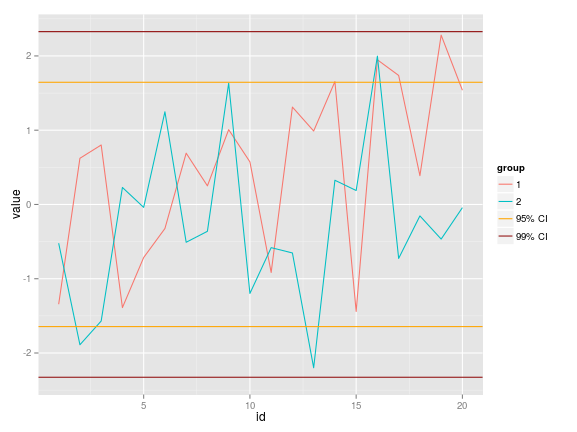 At this point, all works and Enrico was satisfied of its work. But the title of the legend, “group”, refers to the first two lines. 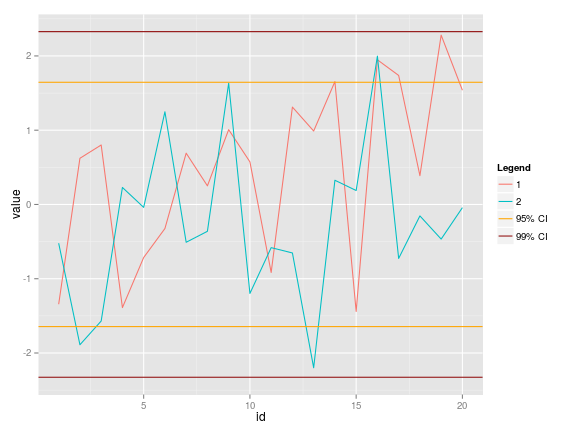 The title of the legend can be easily changed, as it is the first argument of the scale_color_manual() function. But the best solution for his plot, was two different legends: one for group levels and one for the CI horizontal lines. So Enrico asked me if I know how to do this with ggplot. “Yes, of course” was my reply. “I already did it, in the past”. But this was not true. What I did, was the opposite: I merged several aesthetics in a single legend. Maybe I will write a post about this topic, too. I was pretty sure that ggplot doesn't implement a solution to have two legends for the same aesthetic by default. This is not coherent with the grammar idea (the GG in ggplot stands for Grammar of Graphics) and the strong link between plot and data behind ggplot2 package. At the same time, I was pretty sure that someone find a workaround to this issue and share its solution on the net. Maybe someone found a solution but she/he did not share this solution with us. I was astonished, the reply to my question was “you can't do it” (see, for example http://stackoverflow.com/questions/17642190/how-to-set-multiple-legends-for-the-same-aesthetic-in-ggplot2).

During my attempts to get two legends, I tried with two different aesthetics, adding an aesthetic not really useful like fill. Moreover, in the case of lines, fill is also meaningless. 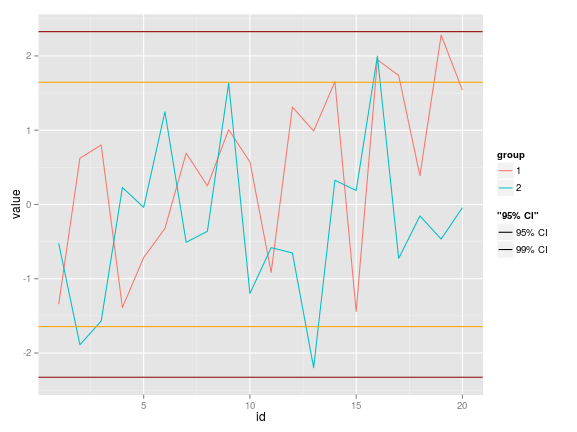 I got two legends, but the legend about horizontal lines does not help to understand the plot, beacuse it does not show the color of the line. This is coherent with the goal of the legend, that is clarify what the fill aesthetic (and not the color) means, but does not help my readers to understand which line refers to which confidence interval (95% or 99%).

Fortunately, guide_legend() allows to change some aesthetic, like the colour, to the elements of the legend. 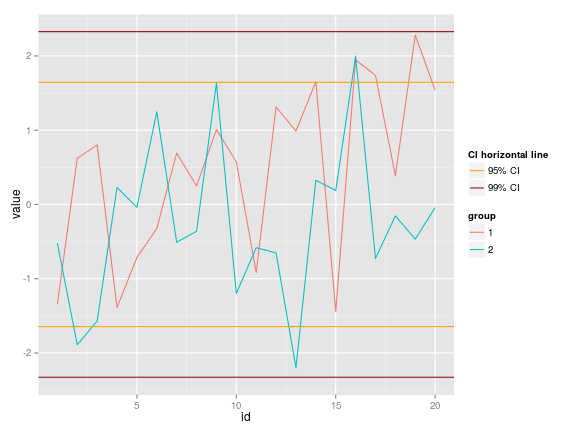 This is what I was looking for: multiple legends for a single aesthetic. Finally, I only added the name for the legend of the group level, and all was done. As seen above, “hue” is the default scale for ggplot discrete colours. So the function, is scale_color_hue().

That's all folks!!! Just some notes:

Preparing the data for modelling with R Why data preparation One of the first things which I came across while studying about data science was that three important steps in a data s...
Few steps to connect R with Excel: XLConnect! Excel is the basic tool for any type of analysis. Often using R we have the need to communicate with Excel, for example read an excel file with...
Sales Dashboard in R with qplot and ggplot2 - Part... In a previous post on my personal blog about creating Pivot Tables in R with melt and cast we covered a simple way to generate sales reports and summa...
Share:

This site uses Akismet to reduce spam. Learn how your comment data is processed.

We are part of